The currency reform of 1247 which saw the introduction of the voided long cross coinage was driven not only by the poor state of the existing short cross coinage, but also by the opportunity to profit from the introduction of a new coinage. In fact it was the King's brother, Richard of Cornwall, who was a main benefactor as a result of his arrangement with the king to provide sufficient silver to permit the re-coinage operation. Richard made a loan of 10,000 marks (equivalent to 1.6 million pence) for which he was due to receive half the profits from the re-coinage for 12 years.  The first of these new coins was introduced in November of 1247, class 1a and issued in London only. Minting was extended to Canterbury and Bury shortly afterwards but with a modified legend to show the abbreviated mint name, these being class 1b coins. Both 1a/1b and 1b/1a mules exist. The mints at London and Canterbury were initially under the sole charge of Nicholas of St Albans, but he was joined by a further three moneyers once the re-coinage was well under way.

The new design incorporated a long cross extending to the edges, such that if any part of the cross had been clipped away then the coin would be unacceptable for use. On the obverse the absence of a sceptre broke with tradition, and facilitated the easy recognition of the new coinage in comparison to the old, though after the successful changeover to the new coinage a new design in late 1250 saw the re-introduction of the sceptre with class 4 coins.

The use of a long cross on the reverse resulted in a reduction in the space available for the inscription, resulting in usually only enough space for three letters in each quadrant. A way around this limitation was to join together (ligate) some of the letters, which can occasionally result in some initial difficulties in reading the moneyer and mint.  Ligation is not a major factor in class 1a coins, but is more of an issue in later classes where the moneyer and mint are shown.

It is quite feasible that the very first dies of the 1a were made by the most skilled craftsman in the workshop. As it was a completely new design it is more than possible that the dies and/or a striking therefrom would have been shown to the king and/or his brother.  Once the decision to go ahead had been taken, there would have been a need for speed of production and coin issuing and so various different dies might well have been in production at the same time.  Naturally the very first dies would be of the highest quality and we may expect that standards may have slipped a little under the pressure of production.

Some dies have omitted the caul over the king's head - these coins may have started to appear shortly later than the initial dies. 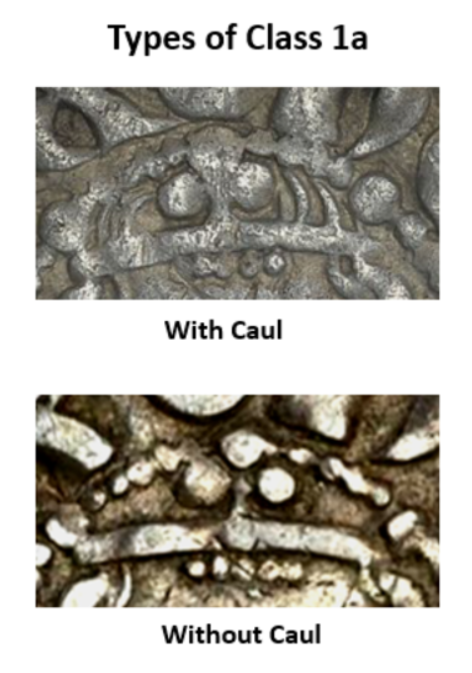 The researches of Michael Edwards in the 1970's resulted in him tracing around 26 specimens of the full 1a penny and Edwards estimated there were some 10 obverse and 12 reverse dies including those used for the 1a mules. Churchill and Thomas in their study of the Brussels Hoard  saw only 5 each of 1a, 1a/1b mules and 1b/1a mules with others from the hoard having been dispersed prior to their study. Their rough estimate is that there are probably up to 35 or so extant in various collections. 1a coins show a significant degree of variability, particularly in the details of the lettering.