Welcome to the May 2022 issue of BNS E-NEWS, which circulates in the week prior to each Society meeting to all members who have provided the Society with an email address.

Minutes of the April meeting

Minutes of the Meeting of the British Numismatic Society, held at the Royal Philatelic Society London and over Zoom on Tuesday, 26 April 2022, Dr Screen, President, being in the chair and 51 other people present [19 in person, 32 on Zoom].

The minutes of the meeting held on 22 March 2022 were approved.

The President apologised for the online broadcast quality of the March meeting.

Dr Joseph Bispham then read a paper entitled Revisiting the Prestwich hoard on the 50th anniversary of its discovery, 1972-2022.

The President then announced the date of the next meeting and closed the meeting.

Our next meeting is live only – so we look forward to seeing you in person!

For our May gathering we return on Tuesday, 24 May, to Swedenborg Hall, Holborn, when the Society will be addressed by Dr Patricia Fara on the subject Life after gravity: Isaac Newton at the Royal Mint. This meeting will be live-only and promises to be an interesting overview of Newton's numismatic activities, amply covered by Dr Fara in her latest publication, Life after Gravity: Isaac Newton’s London Career, reviewed at length in BNJ 91.

Dr Fara is an Emeritus Fellow of Clare College, Cambridge, where she was Senior Tutor for ten years. She originally read physics at Oxford, but was President of the British Society for the History of Science from 2016 to 2018, and is currently President of the Antiquarian Horological Society. As well as lecturing and teaching, she writes popular books and articles, and is a regular contributor to British radio and TV programmes such as In our Time and Start the Week. She is especially interested in the Enlightenment period, with a particular emphasis on scientific imagery and women in science, both past and present. Her prize-winning Science: A Four Thousand Year History (2009) has been translated into nine languages, while her recent publications also include A Lab of One’s Own: Science and Suffrage in The First World War (2018).

Swedenborg Hall is located at 20-21 Bloomsbury Way, London WC1A 2TH. Please use the entrance in Barter Street. Doors will open at 6pm and the meeting commences at 6.15pm. At the conclusion of the meeting all are welcome to stay for the Society's Anniversary Reception, which is being kindly sponsored by an anonymous member to mark his 50th anniversary of membership.

If you are in London that day we look forward to your company; the nearest Underground station is Holborn.

Our lecture on 24 May
For the last 30 years of his life, Isaac Newton lived in London and ran the Royal Mint as well as the Royal Society. Formerly a reclusive scholar at Cambridge, he now moved in aristocratic circles, exerted political influence and became very rich. Although often antagonizing his staff as well as his colleagues, he oversaw the great recoinage of 1696, greatly improved efficiency, and was responsible for placing Britain on the Gold Standard. He also benefitted financially and scientifically from the international trade in enslaved peoples.
The Summer Meeting at Oxford has been cancelled

It is with regret that we announce that the Summer Meeting for 2022 has been cancelled. Unfortunately unforeseen circumstances arose and it is no longer possible to go forward with the day.
Prof. Roger Bland, President, RNS
Dr Elina Screen, President, BNS.
Special Publications at special prices! 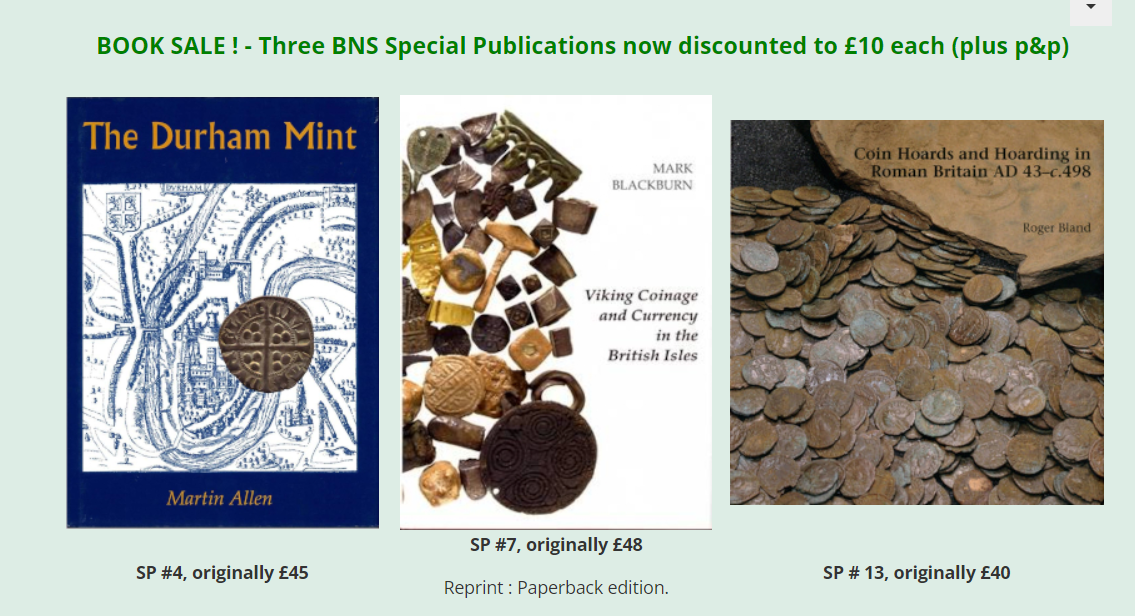 If your interests encompass Roman, Viking age or the products of the Durham mint, why not take advantage of unrivalled special offers on these three standard references published by the Society? While stocks last, each title is available from Spink, the Society's distributor, for a bargain-basement £10, plus postage and packing.

For more than three decades the late Dr Mark Blackburn (1953−2011) was one of the leading authorities on the monetary history of Britain, Ireland and Scandinavia in the early Middle Ages. This volume brings together 15 of his papers on the theme of Vikings and their currency in the British Isles, from the dual monetary and bullion economy that emerged after the Scandinavian raids and conquests of the 9th century, to the establishment of dynamic new coinages by Viking rulers. Among them is a study of over 1,000 coins and other metallic objects associated with the winter camp at Torksey set up by the Viking Great Army in 872−3.

Bishops of Durham had the right to mint coins from the late 11th century to the mid-16th century. Many thousands of these coins survive, and more are found each year. Dr Allen's book, which was the first to be published on the Durham mint since 1780, places the coins in the context of the abundant manuscript sources for the history of the mint. It provides a comprehensive account of the mint, reconstructing its operation as a business at the mercy of market forces, and assessing its contribution to the exceptional palatine privileges of the prince-bishops of Durham.

Britain has a uniquely rich heritage of coin hoards of the Roman period, with over 3,400 known from the Iron Age through to the fifth century AD. Prof. Bland's book is the product of a lifetime’s work studying these hoards and is the first comprehensive survey for 80 years. There are chapters on the study of hoards, on hoarding in general, on the Iron Age to Roman transition to AD 69, the denarius period (69−238), radiate hoards (238−96), the fourth and fifth centuries (296−c. 491) and late Roman precious-metal hoards. It also contains a full checklist of all Iron Age and Roman coin hoards.

To order, visit Spink Books
Dates for your diary

September 30 to October 2.  40th Annual Token Congress (Northampton). This email address is being protected from spambots. You need JavaScript enabled to view it.